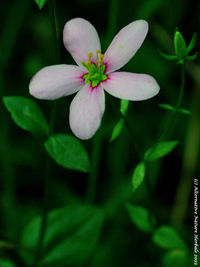 Centaurium erythraea is a bi-annual herbaceous plant with basal rosette of leaves and clusters of 5-petaled pink flowers. The stem is erect and square reaching up to 12 inches with much branching out at the top. The leaves are shiny and light green. There are many species of Centaurium and others in the Gentianaceae family that are easily mistaken for this species. [1] To explore the characteristics, medicinal uses and prescribing considerations of this herb in more detail, check out the references indicated. [2], [3]

Centaurium Erythraea is believed to have been used by the centaur Chiron for an arrow wound. It is also considered lucky by the Celts and is included as an ingredient in vermouth. It has been used, historically, for fevers.

The herb should be taken over several weeks for best effect and should be sipped slowly.[5]

The safety and prescribing considerations for Centaury include: [6], [7]