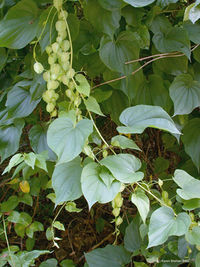 Wild Yam (Dioscorea villosa) is most commonly known as women's tonic, especially for conditions involving pain such as dysmenorrhea and pain associated with pregnancy. It is also effective in the treatment of colic, irritable bowel syndrome, arthritis and other conditions that have pain as a key symptom. To explore the characteristics, medicinal uses and prescribing considerations of this herb in more detail, check out the references indicated.[1], [2]

Dioscorea villosa has been used as a source of raw material for the manufacturing of synthetic contraceptive hormones and corticosteroids.