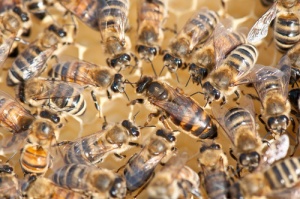 Royal jelly is produced by worker bees in order to feed the queen bee. It is produced in the glands found in the back of bee's throats and is made from mixing honey, bee pollen, and enzymes to make a thick, milky substance.[1] The sole purpose of this royal jelly is to feed the queen bee which allows her to live for up to five to seven years compared to the lifespan of a normal worker bee which is seven to eight weeks. It is therefore coveted for its suspected anti-aging properties. Royalsin, a protein found in royal jelly has been found to have antibiotic properties against gram-positive but not gram-negative bacteria. Royal jelly also contains sugars, lipids, vitamins such as pantothenic acid, minerals, and phytosterols. It is often used for its lipid lowering, antibacterial, anti-inflammatory, and anti-proliferative actions.[2].

The following is a list of the primary uses for royal jelly.[1], [2]

Royal jelly is used in some cosmetic preparations. It is important to be aware of this in case of allergic hypersensitivity.