The following are some of the most common skin conditions treated by naturopathic doctors:

Functions of the Skin

The skin is a very complex organ with a vast array of functions. It is linked to and a reflection of a person's inner state of health.[1] 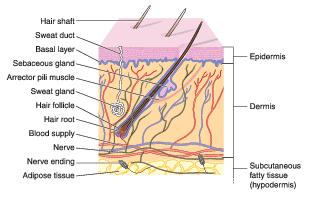 The apperance of abnormal changes, or lesions, in the skin is an important element in diagnosis and treatment.

Skin Colour - The normal colour of the skin depends on ethnic origin. Skin colour changes that may indicate an underlying condition or concern include: paleness, yellowness, redness, purple discolouration, brown spots, black spots or areas of skin.
Primary Lesions are the earliest changes to appear and include macule or patch, papule, plaque, nodule, pustule, vesicle, bulla, wheal or hive.
Secondary Lesions result either from the development of primary lesions or from manipulation of the primary lesion. They include scales, crusts, erosion, ulcer, fissure, atrophy and scar.
Other Skin Lesions include excoriation, comedo, milia, cyst, burrow, lichenification, telangiectasia, petechiae, purpura and acanthosis.
Other characteristics associated with the skin include: dry skin, hyperpigmentation, tone and texture of the skin.

When treating skin conditions it is important to treat both the inner body and the skin itself. Topical applications alone are seldom effective and can be suppressive. Skin conditions truly utilize the ecletic nature of naturopathic medicine: