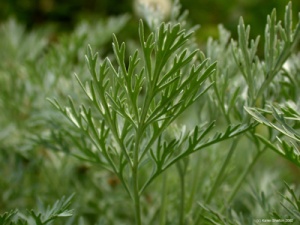 Wormwood (Artemisia absinthium) is best known as a de-wormer for parasitic infections due to its antihelmintic properties. It is also a very strong bitter and can be used to aid digestion and to support the immune system. Long-term use can be toxic, so it must be used with caution. To explore the characteristics, medicinal uses and prescribing considerations of this herb in more detail, check out the references indicated.[1], [2]

Dioscorides mentions Artemisia absinthium as a vermifuge or de-wormer. It has been used as a vermifuge and bitter for indigestion, fever, infection, as an antidepressant and an insecticide due to the sesquiterpene lactones. Absinthe and vermouth (meaning "wormwood" in German) both take their names from this plant.

If using the herb for worms, the pill form of the powdered herb may be preferred due to the extreme bitterness. If using it as a digestive aid, the bitterness must be tasted in order to be effective.