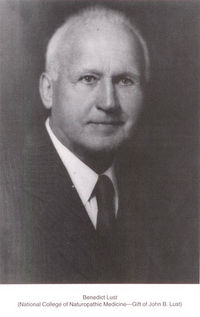 Dr. Benedict Lust (1872 - 1945) is considered the father of American naturopathy. Born in Baden, Germany he, like many of the founders of naturopathy, had been introduced to natural forms of healing due to personal health concerns. Dr. Lust had originally immigrated to the United States in 1892 to seek his fortune, yet when he contracted a severe case of tuberculosis that was not getting any better with conventional treatments, he returned to his homeland to undergo the water cure treatments with Father Kneipp. Within a very short period of time his health improved. During his time in Europe, Dr. Lust visited and studied with many of the nature-curists of his day including Kuhne, Lahmann, Just and others.

Once Dr. Lust was cured, he was asked by Kneipp to spread hydrotherapy to America. He returned to the United States in 1896 with his colleague Dr. Robert Foster and established two Sanitariums and Kneipp Water Cure Institutes, one in Butler, New Jersey in 1902 and another in Tangerine, Florida in 1914. In 1901 Dr. Lust opened the American School of Naturopathy in New York, which was the first naturopathic college in America. He also opened what could be considered the first health food store or Kneipp store as they were initially known. From the onset. Dr. Lust integrated the Kneipp water cure methods with the many other therapies that he had encountered. 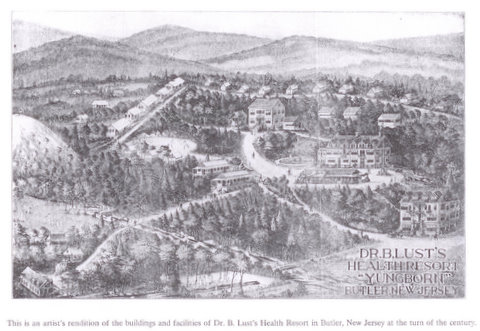 Over the years, Dr. Lust undertook further training in a number of other natural therapies. He graduated from the Universal Osteopathic College of New York in 1898, received his medical degree in 1902 from the New York Homeopathic Medical College and received an eclectic medical degree from the Eclectic Medical College in New York in 1913. He was editor of the professional journal Father Kneip Blatter - which came to be called Naturopathy and Herald of Health. As well, for over thirty years he edited the public journal, the Nature's Path.

"[Dr. Lust was . . .] Opposed to the processing of foods because such 'manufacture' tends to destroy their true nutritional values . . . Opposed to the adminstrations of all drugs and narcotics because they are unnatural elements which the human body is not capable of assimilating . . . Opposed to the regimentation of the American people under medically contolled elements because such legislation will wipe out other methods of treatmentt and bring inestimable damange to the health of every many, women, and child affected . . . Opposed to any legislation which in practice would prevent a family from attending to its own ills or the choosing, by such family, of any type of treatment it might desire because such legislation restricts personal liberty and tends to take from the American people the right to use the beneficial homespun efficient remedies which have been handed down from generation to generation."

In his efforts to promote the growth and understanding of the science and art of naturopathic medicine, Dr. Lust's life was not without personal sacrifice. He was arrested some three dozen times for practicing medicine without a license. but attempts to suppress his efforts were thwarted, as all cases were dismissed from the courts. It was not as a practitioner, however, but as an educator, promoter and organizer of naturopathy that Lust had his greatest impact. He was the founder of the American Naturopathic Assocation, which was known as the Naturopathic Society of America from 1902 to 1912.