The Start of Naturopathic Medicine

The term "Naturopathy" was first coined in 1885 by Dr. John Scheel, a German homeopath practicing the methods of Kneipp and Kuhn at his Badekur Sanitarium in New York. Benedict Lust purchased the name in 1901 to describe the eclectic pratice of "nature doctors". The Kneipp convention held in New York in 1901 marks the birth of naturopathy in America. At that time, Naturopathy embraced all known means of natural therapeutics, including diet, herbs, hydrotherapy, homeopathy, exercise, manipulative therapies, electrotherapy, psychological and spiritual counselling. Louisa Lust, a naturopath and the wife of Benedict Lust, provided much financial backing for the naturopathic profession in its early years. Dr. Henry Lindlahr and other significant naturopaths influenced the profession in the early years.

Naturopathy developed at time when there was tremendous change and advancement in North America with respect to health care. Homeopathy had been brought to America in 1833 by Dr. Constantine Hering, Osteopathy was established by Andrew Taylor Still in 1874 and Chiropractic medicine was established in 1895 by Daniel David Palmer. Many of the early naturopaths held multiple designations and there was an acceptance and appreciation for the different forms of healing.

During the early 1900s naturopathy grew rapidly, as did many of the other alternative systems of medicine. This was a time when both Canada and the United States were developing as nations and building an infrastructure of governance that would greatly influence the direction and acceptance of different forms of health care. During the early years, the establishment of large sanitariums or medical institutions were common practice. These sanitariums offered a broad range of natural therapeutics and focused on both acute and chronic illnesses. These sanitariums and institutions were initially not-for-profit and were run by municipal governments, charitable organizations and special interest groups. Over time sanitariums and asylums were replaced with government run hospitals.

The development of the naturopathic medical institutions started very much like that of conventional medical colleges - a few charismatic practitioners starting schools, initially apprenticeship based and privately funded. The first Canadian medical school was opened in Montreal in 1824, in the 1870s medical schools started to introduce a hands-on approach to assessment, and in 1871 Harvard University created the first four-year medical educational curriculum in America. 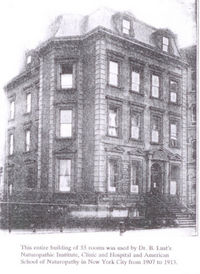 Dr. Benedict Lust established the first naturopathic educational institution, the American School of Naturopathy in New York City in 1900 which offered several branches of nature cure in a two-year general course. Dr. Forster founded a similar institution in Idaho a few years later. By the mid 1920s there were about 20 schools of naturopathy in existence. The early naturopathic education was unique and powerfully vitalistic, yet it suffered because it had not reached maturity in the context of professional unification or in uniform accreditation standards. Some of the naturopathic colleges offered four-year programs; others offered shorter programs that did not live up to the standards that were being set by the governing bodies of the profession.

After the release of the Flexner Report many medical schools, conventional and alternative, closed. The few remaining naturopathic schools had merged with chiropractic schools. By the early 1950s most of the chiropractic colleges that offered a naturopathic curriculum cancelled that part of their program. National College of Drugless Physicians in Chicago, which graduated over 85% of the naturopathic doctors practicing in western Canada and United States closed it naturopathic program. By 1953 Western States Chiropractic College (WSCC) in Portland, Oregon was the only institution offering an approved ND program. They cancelled their ND program in 1955.

Naturopathic Medicine enjoyed wide acceptance and growth for its first thirty years. During this period most sytems of medicine, whether conventional or alternative, coexisted quite nicely. The period from 1930 to 1970 marked its legal and economic suppression. Part of the difficulties that the naturopathic profession faced were due to their struggles with conventional and chiropractic medicine. Other factors that contributed included:

The emphasis of scientific research and of health care became increasingly focused on technology and the use of pharmaceuticals. With the promise of miracle drugs, there became a decreased focus on self-responsibility and on the relationship that human beings had to their lifestyle and environment. There became a greater separation between the physician and the patient, and the patient to the cause of their disease.

The unfolding of the naturopathic profession was influenced by the economic and political climate of its time. It was also influenced by the origins and history of medicine itslef. The timelines below provide a window into the events that have shaped the profession.