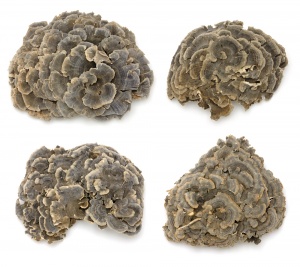 Coriolus (Coriolus versicolor) is best known for its use in the treatment of cancer. To explore the characteristics, medicinal uses and prescribing considerations of this herb in more detail, check out the references indicated. [1], [2]

White underbelly of Coriolus versicolor has thousands of pores instead of gills that do not discolour when you scratch them.[3] [4] The fan-shaped fruiting bodies resemble a spread out turkey tail and are variously colored. They overlap in groups on dead trees. The top of the mushroom is zoned in browns, whites, grays, or blues and has hairy bands.

The studies use preparations of PSP and PSK in their trials. PSK is a commercial drug (Krestin) derived from hot water extractions of "mycelial cultures" rather than the actual mushroom. One particular trial involved dosing PSK orally at 3 grams per day for 3 months for gastric cancer and patients displayed an average higher survival rate.[6]

The safety and prescribing considerations for this herb include:[7], [8]