Foundations and Applications of Medical Biochemistry in Clinical Practice 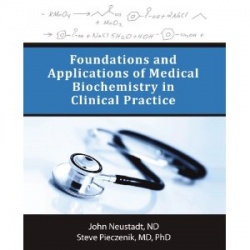 The culmination of more than ten years of research by the authors, this book describes for the first time ever the scientific basis and clinical applications of medical biochemistry, a fundamental paradigm shift in medicine. This paradigm shift is so revolutionary that it has been called the Neustadt-Pieczenik Paradigm, which is the fusion and clinical applications of biochemistry, thermodynamics, physiology, fractal enzymology, nutritional medicine and laboratory testing to identify and correct the underlying causes of many diseases that are considered genetic in nature (eg, Phenylketonuria) and those that are not considered genetic (eg, mature onset asthma, depression, fatigue). In this new medicine, doctors must reject the failed, purely symptomatic treatments they learned in medical school and focus on learning and treating the underlying biochemical causes of disease. From the first documented clinical observations of biochemical individuality in the early 1900s to the development of sophisticated biochemical tests, the authors provide a detailed and stunning analysis of a new medical model to help millions and cure our ailing healthcare system.

John Neustadt, ND, received his naturopathic medical degree from Bastyr University. Dr. Neustadt also earned degrees in literature (cum laude) from the University of California, San Diego, and botany (departmental honors) from the University of Washington. He worked as a journalist in Chile and San Francisco before returning to naturopathic medical school. He is medical director of Montana Integrative Medicine and president and CEO of Nutritional Biochemistry, Incorporated (NBI) and NBI Testing and Consulting Corporation in Bozeman, Montana. Dr. Neustadt is an editor of the textbook Laboratory Evaluations for Integrative and Functional Medicine, is a Contributing Editor to the Journal of Prolotherapy and on the editorial advisory board for Remedies Magazine. He has published more than one hundred research reviews, is coauthor with Jonathan Wright, MD, of the book Thriving through Dialysis, and with Steve Pieczenik, MD, PhD of the book A Revolution in Health through Nutritional Biochemistry. Steve Pieczenik, MD, PhD, trained in Psychiatry at Harvard and has both an MD from Cornell University Medical College and a PhD in international relations from MIT. He is a board-certified Psychiatrist and was a board examiner in Psychiatry and Neurology. He is chairman of the boards of NBI and NBI Testing and Consulting Corporation, as well as an angel investor who has started more than thirty successful companies.