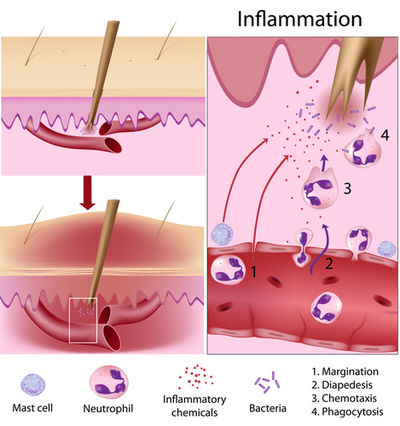 Inflammation is a physiological process that has been described since ancient times as a response to infection or injury characterized by cardinal symptoms of redness (rubor) and swelling (tumor) with heat (calore) and pain (dolore) and possibly the loss of function (functio laesa). The steps involved in the development of the inflammatory process are well understood as part of the normal immune response of host defense and tissue repair.

Many of the major contributing factors to inflammation also are well known including:

Current evidence suggests that although these and other commonly described signalling molecules do play important roles in the inflammatory process it is much more complex with many more molecules orchestrating the entire process in an interrelated network.[7] One particular recent development is the discovery of the inflammasome, a tightly regulated intracellular multiprotein complex of the innate immune system at the hub of the signalling pathways of different inflammatory diseases including obesity-induced inflammation, insulin resistance and autoimmunity.[9], [10]

There are many conditions that are associated with increased inflammation including: