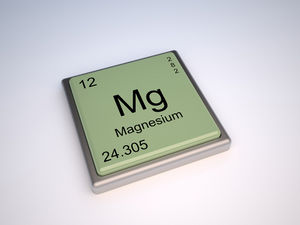 Magnesium is an essential mineral and the fourth most abundant mineral in the body. It primarily acts as a key player in over 300 biochemical reactions, specifically those involved in energy production. Over 60% of magnesium in the body is found in bones, about 26% is found in muscle, and the rest is found in soft tissue and body fluids. The tissues that have the highest magnesium concentrations are the brain, heart, liver and kidney because they are highly metabolically active. [1]

Magnesium is abundant intracellularly, second only to potassium. When magnesium is deficient, it effects the potassium levels within cells and greatly effects cellular functioning. Magnesium and calcium also have a relationship in that when magnesium absorption is high, calcium absorption will be low; the opposite is also true. Magnesium has the ability to block calcium entry into vascular smooth muscle cells and the heart and therefore is used to treat many cardiovascular conditions. This essential mineral also regulate calcium metabolism via its action on parathyroid hormone and calcitonin, two hormones which act to keep calcium levels in the body in check. [2], [1]

The following foods have the highest concentration of magnesium. For a more expansive list on food sources of specific nutrients visit Health Canada's Dietary Reference Intakes for Elements or USDA's National Nutrient Database

Other food sources include:[3]

The following is a list of the primary uses of magnesium. [1]

Magnesium deficiency is common in the geriatric population as well as in women during the premenstrual period. Deficiency is often secondary to conditions that reduce absorption or increase secretion such as: high calcium intake, alcohol, surgery, diuretics, liver and kidney disease, and oral contraceptive pill use. Signs and symptoms of deficiency include:

Magnesium excess is rare and is typically iatrogenic from IV magnesium, from laxatives or antacids containing magnesium, or intramuscular injections. Signs and symptoms of excess or toxicity may include:

Low serum magnesium reflects end-stage deficiency as most of the body's magnesium concentrates in the cells and not in the serum. The best test to detect deficiency is the level of magnesium in the red blood cells.

The different types of magnesium include: