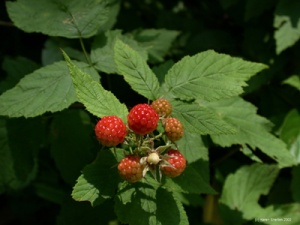 Raspberry Leaf (Rubus idaeus) is a mild and safe medicinal food. It is commonly used to treat diarrhea, colds, and stomach complaints. Traditional lore suggests that pregnant women use raspberry leaf tea, especially as an aid in delivery. To explore the characteristics, medicinal uses and prescribing considerations of this herb in more detail, check out the references indicated.[1] [2]

Traditionally in Europe, the flowers of the Rubus idaeus plant have been bruised and mixed with honey for use during eye inflammations, fever, and boils. The plant has also been used for such conditions as aphthous ulcers, wounds, bleeding gums, sore throats, and other oral cavity inflammations (gargle), and conjunctivitis (eyewash). Historically is has been used as a femal tonic to alleviate menstrual cycle discomfort and facilitate childbirth.