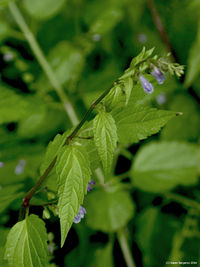 Skullcap (Scutellaria lateriflora) is known for its use in treating nervous tension, exhaustion and hysteria. To explore the characteristics, medicinal uses and prescribing considerations of this herb in more detail, check out the references indicated. [1] [2]

Scutellaria lateriflora was used by the Native people of North America for ailments associated with menstruation and breast pain. In the 19th century, herbalists used it to treat hysteria, epilepsy, convulsions, schizophrenia, and even rabies. In general, Scutellaria lateriflora has been known for its use in treating nervous tension, exhaustion, spasm, and hysteria.