An egg consists of a protective outer shell made of calcite, layers of the water soluble proteins albumin, mucoproteins and globulins (egg white), vitellus (egg yolk) and structural fibers called chalazae that anchor each end of the yolk in the egg white. Each of these structures lies within a number of thin membranes.[1]

The development of an egg begins as a yolk inside a hen. A yolk (which is an oocyte at this point) is produced by the hen's ovary during ovulation, however, it is important to note that eggs sold for human consumption have not been fertilized. Blood spots are occasionally found on an egg yolk and do not indicate a fertilized egg. They are caused by a rupture of a blood vessel on the yolk surface during the formation of the egg and are safe to eat.[1] 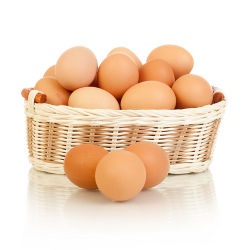 There are a number of different types of eggs commonly consumed by humans including: duck, quail, turkey, goose and chicken, with the latter being the most popular.[2]

As a result of changing dietary habits, annual total chicken egg consumption in Canada dropped from 23 dozen per person per year in 1960 to 14.4 dozen in 1995. Since 1995, egg consumption has increased slightly, and in 2009 16.1 dozen eggs were consumed per person..[2]

When determining whether to include eggs in your diet it is advisable to consider the recommended daily limits on cholesterol derived from food sources.