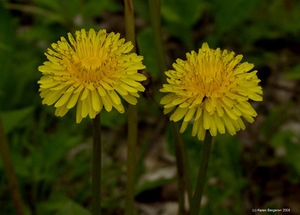 Dandelion (Taraxacum officinale) is well known because it grows virtually everywhere worldwide and is a very hardy perennial herb. It grows to a height of about 12 inches, with oblong, deeply toothed, hairless green leaves and distinctive yellow flowers that bloom year-round. The thick taproot is dark brown on the outside, white on the inside and may exude a milky substance, the latex, which is present in the whole plant. The flower stem arises from the middle of the rosette giving rise to a single composite head of smaller ligulate ray flowers. The flowers develop into pappus after blooming, which is scattered by the wind. When the plant matures, the flower turns into a fuzzy, globe-shaped cluster that contains seeds for propagation. In many countries, Dandelion is used as a food.[1]

To explore the characteristics, medicinal uses and prescribing considerations of this herb in more detail, check out the references indicated.[2], [3]

Dandelion is native to Europe especially in the area of Asia minor. The first mention of dandelion was in the 10th and 11th centuries in Arabian medical texts.

Dandelion is considered a safe herb. The appropriate formulation depends on the desired effect, a person's state of health and the medications or supplements that are being taken. For advice on what formulation of Dandelion is appropriate and the dosage work with a naturopathic doctor or other properly trained health care provider.

The safety and prescribing considerations for this herb include:[5], [6]