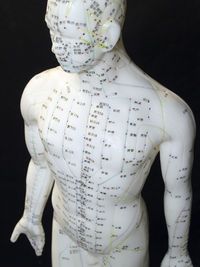 Most naturopathic doctors in North America are trained in the practice of acupuncture, the principles of Traditional Chinese Medicine (TCM), and to varying degrees in the use of eastern botanicals.[1]

Traditional Chinese Medicine is a holistic system of medicine that has been part of the Chinese culture for over 3000 years. In Chinese Medicine human beings are perceived as a microcosm of the universe that surrounds them. Optimizing human life by preserving the conditions within which it thrives is a the purpose of Chinese Medicine.[2].

The philosophies and principles of Chinese Medicine explain how the body works as an integrated system. There is a recognition that the accumulation and balance of the attributes within an individual (Yin-Yang, heat-cold, blood-Qi) determine a person's internal climate, and therefore their health or disease. The fundamental principles of TCM include:

The principles and thory underlying the techniques of acupuncture date to the ancient times of the great Yellow Emperor, Huangdi (~2698-2598 BC).[3]

Large research academics, the largest being the China Academy of Traditional Chinese Medicine in Beijing, and various universities and schools of TCM, have created a huge research culture in China. The primary focus of the research has been on chinese herbs, but there is also a tremendous amount of research describing the mechanism and benefits of acupunture.[4]