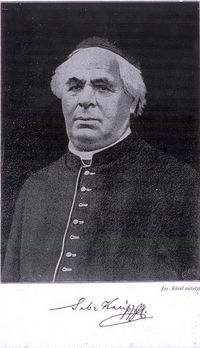 Of greatest and lasting influence to the naturopathic profession was the work of Father Sebastian Kneipp.[1] A physician / priest, Kneipp was cured of a chronic lung disease by Vincent Priessnitz through the liberal use of ice-cold water, and he was influenced by the writings of Hahn.

In 18th century, Kneipp was one of the most famous people in the world for his success in treating thousands of people with natural remedies such as pure water, fresh air, exercise, and herbs and by teaching millions of others about these remedies through his popular health writings.[2] Kneipp's approach to healing was holistic, advocating “the balance between work and leisure, stress and relaxation and the harmony between the mental, emotional, physical, social and ecological planes.” In short, ‘he asked for a different life, not for better pills; he asked for the active patient and rejected the passive one.” Using an eclectic and integrated approach, Kneipp combined hydrotherapeutic baths with heliotherapy (sunshine), exercise, vegetarian and fruit diets, and the indigenous European herbs so well known to him.

Even though the church did not initially support his "healing" methods, his fame spread throughout the continent and his small town of Woerishoften grew from a hamlet of 500 to a permanent population of 15,000. The establishment that he created received about 20,000 people per year, including the crowned heads of Europe.[2]

Kneipp believed that disease was due to toxins in the blood that couldn't get eliminated from the body. Water healed by dissolving and removing the toxins from the blood, restoring normal circulation and strengthening the entire system. Kneipp support the healing power of nature and he was a keen observer of the human condition. He was known for his gentleness and his ability to adjust each treatment based on the nature and physical stature of the patient. Kneipp's mother was an herbalist and it was natural for him to include herbs as an integral part of his treatments. "He believed" that both cures, the interior and the exterior, harmonize and work together in perfect unity."[2]