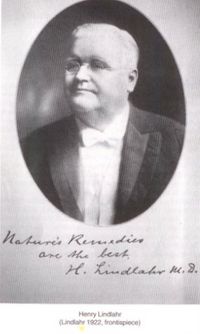 Dr. Lindlahr was the mayor of a town in Montana and a thriving businessman. In his thirties he was overweight and diabetic. When he was unable to find appropriate treatment for his diabetes in America, he travelled to Europe and found curative results under the guidance of Father Kneipp.

On returning to America in early 1900 he enrolled in the Homeopathic and Eclectic College of Illinois. After graduating in 1904, he opened the Lindlahr Sanitarium in Chicago, and shortly thereafter, he founded the Lindlahr College of Natural Therapeutics which included hospital internships at sanitariums. It became the leading naturopathic college of the day. 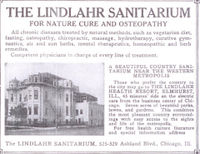 In 1908, Dr. Lindlahr began to publish the Nature Cure magazine and began publishing a series of books titled, Philosophy of Natural Therapeutics. His therapeutic regimen combined the use of breathing, fasting and specialized diet, fever therapy, exercise and rest, sun and light, as well as counselling to address mental and emotional concerns. He utilized various detoxifying or cleansing foods, in particular - orange juice, lemon, grapefruit, garlic, bean sprouts, fibre and laxatives. Besides these items, he pioneered the use of vitamin and mineral supplementation, forming what may have been the first company that produced thiamine (Vitamin B1) commercially. It was written that Henry Lindlahr "...is remembered for his conviction that disease did not represent an invasion of molecules, but the body's way of healing something. In other words, he viewed symptoms as positive physiological response and proof that the body was fighting whatever was wrong."