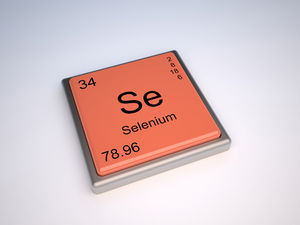 Selenium is an essential trace element which primarily functions as a component of glutathione peroxidase which is an antioxidant enzyme. Selenium also works together with vitamin E to prevent free-radical damage to cell membranes. Risk of cancer, cardiovascular disease, inflammatory disease, and other conditions which are linked to increases in free-radical damage are all associated with low levels of selenium. Selenium also helps to protect against mercury, cadmium, arsenic, silver, copper, and other heavy metal toxicity [1] [2].

The following foods have the highest concentration of selenium. For a more expansive list on food sources of specific nutrients visit Health Canada's Dietary Reference Intakes for Elements or USDA's National Nutrient Database

The level of selenium found in food is a direct reflection of the selenium levels found in soil.

Other food sources include:[3]

More common are the symptoms and conditions associated with chronic low selenium intake and include:[2]

Selenium has a narrow margin of safety. 800mcg is probably the highest dose that can be taken daily long-term before toxicity may develop.

Higher doses may lead to signs and symptoms such as:

Severe overdose may lead to: