Uterine fibroids, also known as leiomyomas, fibromyoma, myoma or fibroids, are the most common non-cancerous growths in women. They can occur as single or multiple growths in the uterus.[1] Fibroids may be present in up to 20-50% of reproductive aged women.[2] They arise after menarche and resolve by menopause.

In order to stimulate the innate ability of the body to heal the causes of disease must be identified and addressed. With uterine fibroids, the causes are variable and include lifestyle and environmental factors. A detailed assessment is required to determine which factors are contributing to uterine fibroids. 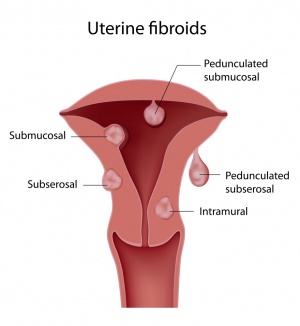 A full health history including a detailed look at the pattern and symptoms of a women's period. A physical exam that includes a pelvic exam to inspect the size and shape of the uterus.

Other conditions that are associated with fibroids include:

Fibroids are characterized as:[1]

Fibroids, especially when small, may cause no symptoms at all. For larger fibroids the common symptoms include:

The goal of naturopathic treatment is to support and work in tandem with the healing power of the body and to address the causal factors of disease with individual treatment strategies. The primary risks associated with fibroids include anemia due to the heavy bleeding. The naturopathic treatment strategy is to decrease the discomfort and risk of bleeding associated with fibroids and to address the underlying causes.

Naturopathic Therapies for uterine fibroids include: