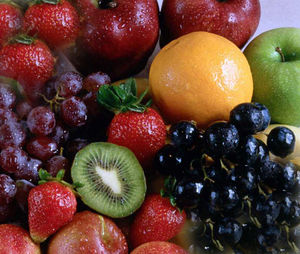 Vitamin C, or Ascorbic Acid is a water-soluble micronutrient. Perhaps this vitamin is best known for when it was discovered as the heroic cure for Scurvy. It plays a critical role in collagen synthesis which is a one of the body's main proteins. Due to this vital role it plays in manufacturing stabilized collagen, it is very important for wound repair, healthy gums, and for prevention of easy bruising. Vitamin C is also vital for immune function, the synthesis of some nerve transmitting substances and hormones, carnitine synthesis, and the absorption and utilization of other nutrients. Vitamin C is also an important antioxidant.

It is important to eat fruits and vegetables after they have been freshly cut as exposure to air overtime actually destroys the vitamin C and thus decreasing the vitamin C content.

The following are the primary uses of Vitamin C.[2] [3]

Scurvy is likely the best known nutrient deficiency which is cause by a vitamin C deficiency. Symptoms include:

Vitamin C at high doses is tolerated in most people. Side effects for some may include:

These effects are dose dependent and can be reversed by taking a lower dose that is more tolerable. Dosing to bowel tolerance is a common method used to achieve a therapeutic dose for an individual.