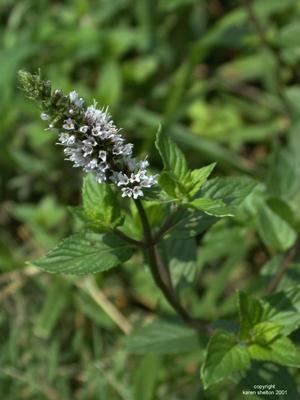 Of all the mints, peppermint (Mentha piperita) is the most widely used due to its high content of menthol. Peppermint has an antispasmodic effect that soothes stomachaches and is effective in colic and flatulence. It is a fragrant perennial plant with stems up to four feet tall and square. Leaves are opposite, toothed and hairy on the underside. The pinkish flowers are in whorled clusters in the axils of the upper leaves. Flowers rarely produce viable seeds. Propagation is by underground stolons making the plant very spreading in nature. M. piperita is a hybrid of two other mints, possibly spearmint (M. spicata) and water mint (M. aquatica).

To explore the characteristics, medicinal uses and prescribing considerations of this herb in more detail, check out the references indicated.[1], [2]

Mints have been used worldwide for centuries as medicinal and culinary herbs. M. piperita does not have the same history in the Western world because it is a hybrid and was not grown in England until the mid 1700's. M. piperita is native to the Mediterranean region and may have been cultivated as long ago as the time of the ancient Greeks and Egyptians. Due to its penetrating odour, it has been used as a stimulant and nerve tonic. M. piperita can also be used in treating mouth sores, nausea and impaired digestion. M. spicata, spearmint, also has a pungent volatile oil but is reputed to be less powerful and may be better suited for children and for treatment of general upper respiratory infections.

M. piperita is commonly used for the effects from its volatile oils, mainly menthol.