The term meat refers to the muscle tissue, fat, liver, kidney, tongue, tripe, brains, sweetbreads and heart of animals or birds that is used for food. [1] 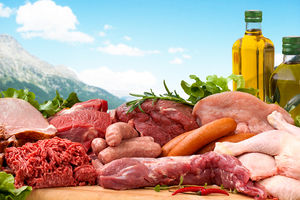 There are three main types of meat:

A distinction can also be made between butcher's meat (beef, veal, mutton, pork and variety meats), poultry and game (e.g. deer)

The chief constituents of meat are water, protein, and fat. Phosphorus, iron, zinc and vitamin B6 and vitamin B12 are also contained in meat, especially in some of the edible organs (e.g., liver). Meats are also rich sources of vitamin B1 and B2 and provide high levels of protein and niacin. It is valued as a complete-protein food, containing all the amino acids necessary for the human body.[1]

Fats: The fat of meats varies greatly depending on the species, cut and quality.

Following are the nutritive values of commonly consumed meats:[2], [1]

It is typically best to choose lean meat protein sources with the highest amount of protein. The following list looks at the protein percentage in meats and other common protein sources:[3]

Protein: Following is the amount of protein in grams per 100 gram (3.5 ounce) portion of meat:

Over the past few decades the relationship between the consumption of poultry and meat and its role in various illnesses has been under a great amount of scrutiny. Specifically:[2]

The current thinking is that being healthy doesn’t mean abstaining from eating meat, as long as one chooses the right cut. Lean cuts of meat can help prevent nutrient deficiencies (e.g. protein, B vitamins), provide support for the immune system and help fortify the blood.

The key is moderation and making meat a part of a balanced diet consisting of whole grains, whole foods (fruits, vegetables) and regular exercise. [8]

Following are some guidelines regarding meat consumption:[2]