Aging is a complex subject. It is a natural aspect of life, yet it is often feared and one that many individuals try to prevent. Aging can be viewed from many different perspectives. The following is an overview of the main theories of aging. 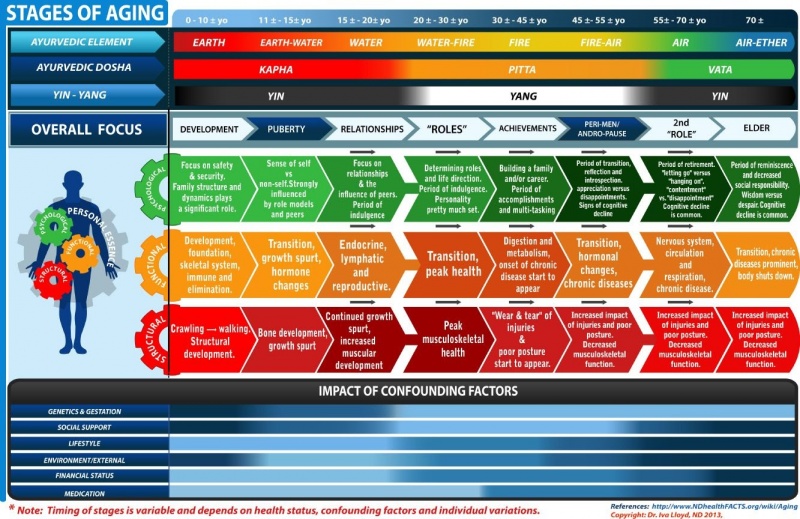 Theories about aging have been around for more than 2,000 years. Some of the original theories of aging included:

"Senescence or biological aging is the process of accumulative changes to molecular and cellular structure that disrupts metabolism with the passage of time, resulting in deterioration and death. Senescence occurs both on the level of the whole organism (organismal senescence) as well as on the level of its individual cells (cellular senescence)." [1]

As mammals of each species have a similar life span, despite considerable diversity among different species, the notion of genetic control of life span is a widely accepted theory. Ideas that support this theory include:[2]

The DNA/RNA Damage Theory relates aging to damage to the DNA or RNA molecules. The notion behind this theory is that there is an innate programmed mechanism that sets the duration of life and ensures that there is sufficient turnover in human life to allow room for the young.[3]

The free-radical theory was introduced by 1954 by Dr. Harman from the University of Nebraska.[5]

The endocrine systems represent the body's "hormonal clock". The endocrine theory states that the biological clocks act through hormones to control the pace of aging.[2]

There are a number of non-programmed theories associated with aging. These theories are relate to the accumulative deterioration of bodily processes and include:

The Wear and Tear Theory, also known as Deterioration Theory was first proposed by Roger Bacon in the 12th century. It was re-introduced by Elie Metchnikoff in 1904 and again in 1982 by Weissmann. It is also referred to as the Rate-of-Living Theory.

The Cross-Linkage theory was first introduced in 1942 by Johan Bjorksten. It is based on the concept that increases in glycation increases aging. Glycation is the result of inappropriate attachments or cross-links to other molecules.

The Rate of Living Theory has also been referred to as the Life Time Energy Potential (LEP) Theory.

All Psychological and Social Aging Theories acknowledge that there is a well-established reduction in social interventions observed in old age. The rational for this correlation is what is debated and argued in these different theories.[6]

In 1968 the Activity Theory was introduced by Havighurst, partly as a rebuttal to the Disengagement Theory.

In 1989 the Continuity Theory was introduced by Atchley.[9].

The Scaffolding Theory of Cognitive Aging

In 2008 the Scaffolding Theory of Cognitive Aging (STAC) postulated that functional changes with aging are part of a lifespan process of compensatory cognitive scaffolding that is an attempt to alleviate the cognitive declines associated with aging. Other concepts in theory include:[10]

In 1992 the Socioemotional Selectivity Theory was introduced by L. Cartensen.

This theory was developed by Bales and Smith in the 1970s and encompasses three principles:

In the 1950s Erikson's theory of the stages of psychological development included eight (8) categories or stages of development, six which focuses on development prior to the age of 25.

In contrast to the theories of psychological development based on passing through stages, this theory proposes that there are five traits that follow a person throughout their life. These traits dispose an individual to particular thoughts, feelings and behaviours.[7]`, [14]

Neuroticism refers to a individual`s level of anxiety, hostility, impulsiveness and self-consciousness.
Neuroticism and conscientiousness tend to result in a greater disease burden. The higher the impulsiveness facet of neuroticism, the stronger it predicts the development of disease, or progression of disease, over time.

Extroversion is characterized by assertiveness, excitement seeking, and positive emotional experiences.
Extroversion is in contrast to introversion. These qualities generally remain stable through adulthood.

Individuals that seek out and are open to new experiences when young are likely to engage in new experiences as they age.
Openness decreases as one develops chronic illness.

Agreeableness is in to antagonistic behaviour.

Neuroticism and conscientiousness tend to result in a greater disease burden.

With the diversity of factors affecting aging there is a lot of debate on the effectiveness of any specific treatment, yet the following treatments and naturopathic interventions may be beneficial in addressing specific aspects of aging and/or slowing down the aging processes associated with many chronic diseases such as diabetes, alzheimer's disease, heart disease, and dementia.

Some research indicates that both lifespan and metabolic potential can be modified by caloric restriction.[15]