Anemia is a sign of an underlying issue with red blood cells (RBCs) and their ability to carry oxygen to tissues, resulting in hypoxia. It occurs when the total number of red cells is low or the amount of hemoglobin is low. Hemoglobin is the protein that carries oxygen on RBCs. Looking for the root cause of anemia is essential to determine the appropriate treatment. [1]

In order to stimulate the innate ability of the body to heal the causes of disease must be identified and addressed. With anemia, the causes are variable. A detailed assessment is required to determine which factors are contributing. Generally there are three main causes of anemia: excessive blood loss (heavy menses, hemorrhage or chronic low-volume loss), easy destruction of red blood cells (hemolysis) or deficient production of red blood cells (ineffective hematopoiesis).

The assessment of anemia is typically determined through general blood work. Symptoms of fatigue, tiredness, dizziness or general weakness can all indicate the need to assess for the presence of anemia especially in young children or menstruating women. Anemia has some direct causes or can be part of another underlying condition. 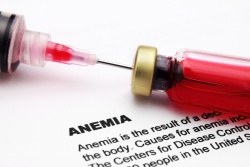 Anemia is commonly associated with other conditions, such as:

The goal of naturopathic treatment is to support and work in tandem with the healing power of the body and to address the causal factors of disease with individual treatment strategies. Anemia is typically treated as a chronic disease, yet there are times when it can be acute. An acute case of anemia due to blood loss should be treated as a medical emergency since if not treated can lead to heart attack, stroke or death. Treatment in this case involves blood transfusion and identifying the source of the bleeding to be stopped. [1]

Naturopathic Therapies for anemia include: