Alzheimer's disease (AD) is the most common cause of dementia in North America, and affects over 30 million people worldwide. The disease can be extremely debilitating, and is characterized by memory loss, cognitive decline, motor skill impairment, issues with orientation ability, and loss of language.[1]

In order to stimulate the innate ability of the body to heal the causes of disease must be identified and addressed. In the case of Alzheimer's disease the causes are variable and include lifestyle and environmental factors. A detailed assessment is required to determine which factors are contributing to the development and progression of Alzheimer's disease.

A diagnosis of Alzheimer's disease is one of exclusion, and can be made after ruling out other possible causes of dementia.

The criteria is based on the DSM-IV include the following: [6] 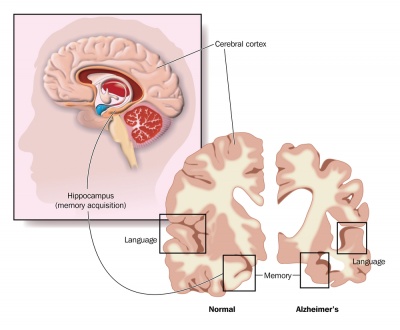 It is now clear that changes in the brain occur 30 to 40 years before the onset of dementia and AD. Information from PET scans have demonstrated lesions in individuals' brains long before they are symptomatic. The main lesions implicated in AD are known as plaques and tangles. A protein called beta amyloid is found in abundance in AD patients, and forms plaques on the outside of brain cells. These plaques initiate an immune resonse which ultimately leads to the death of neurons. Tangles are formed by the Tau molecule, which structurally supports neurons. When this molecule changes shape it causes tangles which also eventually causes neuronal cell death.[3]

The goal of naturopathic treatment is to support and work in tandem with the healing power of the body and to address the causal factors of disease with individual treatment strategies. Alzheimer's disease is a chronic disease and requires consistent and comprehensive treatment in order to delay its progression. The earlier the treatment is started the more effective it seems to be.