A peptic ulcer is a breach in the lining of the stomach or the initial portion of the small intestine (referred to as the duodenum due to damage of the mucosa. More specifically, a peptic ulcer is called a gastric ulcer if it occurs in the stomach and a duodenal ulcer if it is found in the duodenum. Approximately 75% of cases are duodenal with a peak age of 40s compared to 25% gastric with a peak age of 50s.[1]

In order to stimulate the innate ability of the body to heal the causes of disease must be identified and addressed. With Peptic Ulcer, the causes are variable and include lifestyle and environmental factors. A detailed assessment is required to determine which factors are contributing to a peptic ulcer. 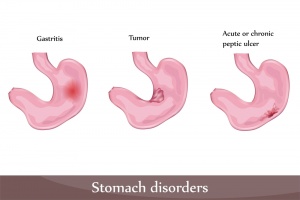 The following tests are often indicated in the diagnosis of peptic ulcers.

Due to the interrelatedness of the body it is common for the disharmony to be expressed in other ways such as:

Normally, the lining of the stomach and small intestines is protected against the irritating acids produced in your stomach. If this protective lining stops working correctly and the lining breaks down, it results in inflammation also known as gastritis or an ulcer.

Most ulcers occur in the first layer of the inner lining. A hole that goes all the way through the stomach or duodenum is called a perforation. A perforation is a medical emergency.

Small ulcers may not cause any symptoms, large ulcers can cause serious bleeding and may present with the following symptoms:

The goal of naturopathic treatment is to support and work in tandem with the healing power of the body and to address the causal factors of disease with individual treatment strategies. Peptic Ulcer is typically a chronic disease which can be treated successfully with naturopathic medicine, antibiotics, or surgery.

The prescribing of naturopathic therapies requires the guidance of a naturopathic doctor as it depends on a number of factors including the causal factors, a person's age, prescription medications, other conditions and symptoms and overall health. It is always advisable to work with a naturopathic doctor prior to taking any natural therapies. Since the majority of eptic ulcer cases are caused by H. pylori infection, eradication of this infection is critical to successful treatment.