Type I Diabetes, also known as insulin-dependent diabetes or juvenile diabetes is characterized by the body's inability to produce sufficient amount of insulin. In the vast majority of Type I Diabetic patients, insulin production is decreased due to autoimmune destruction of insulin-producing beta cells of the pancreas. Insulin is a hormone that facilitates transportation of glucose into cells, when this is absent glucose levels can rise to dangerous levels. The onset of this disease is typically between 7-15 years, but may present at any age.[1] Type I Diabetes accounts for about 10% of all diabetes. [2]

The assessment of type I diabetes typically occurs due an abrupt change in a person's health, especially the young. It's onset is typically associated with key symptoms such as weight loss, increased thirst and urination and fatigue. The aim of a naturopathic assessment is to determine the factors that contributed to the abrupt change and to address accordingly.

In order to stimulate the innate ability of the body to heal the causes of disease must be identified and addressed. Type I is often considered a genetic form of diabetes, yet other factors need to be considered especially if the onset of Type I Diabetes is later in life. 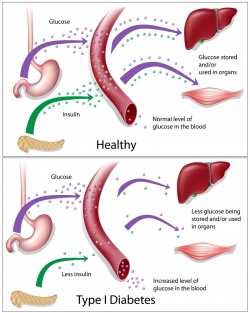 Type I diabetes is associated with other autoimmune disorders:[7]

Type I Diabetes generally starts with an abrupt onset of symptoms. Typically, there is a long asymptomatic period while beta cells are being destroyed. Once destruction reaches a certain threshold, the following symptoms develop quickly:[10]

Type I diabetes is considered an autoimmune disease which involves destruction of the pancreatic beta cells which results in absolute insulin deficiency and dependence on exogenous insulin for life.[10]

The goal of naturopathic treatment is to support and work in tandem with the healing power of the body and to address the causal factors of disease with individual treatment strategies. Type I Diabetes is typically a chronic disease treated with lifelong exogenous insulin supplementation. However, naturopathic medicine can be used in conjunction with this medication to improve glucose control, quality of life, and prevent development of associated conditions.

Naturopathic Therapies for Type I Diabetes include: