Type II Diabetes, which used to be called non-insulin dependent diabetes mellitus or NIDDM, accounts for about 90% of all types of diabetes. It is a condition of disordered carbohydrate, fat, and protein metabolism. Cells throughout the body become insensitive to the action of insulin and blood glucose levels rise as a result. Glucose is then unable to enter muscle or fat cells which results in serious complications throughout the body [1]

In 2005 1.8 million Canadians [2] and 14.6 Americans [3] were living with diagnosed diabetes. In the US, by the time they are 65 years old, 26.9% of individuals have diagnosed or undiagnosed diabetes, mind you due to declining lifestyle and dietary habits more young people are being diagnosed. [4] It is estimated that 1 out of 3 people in North America will develop Type II Diabetes throughout their lifetime.[5]

In order to stimulate the innate ability of the body to heal the causes of disease must be identified and addressed. Diabetes is known as a lifestyle disease as it is triggered primarily by lifestyle factors, although other factors also come into play.

The lifestyle factors associated with Type II Diabetes include: 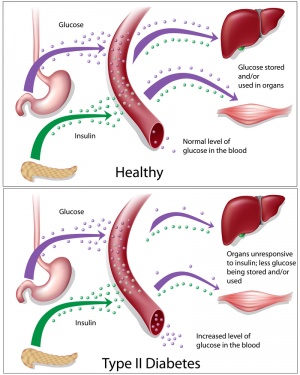 Diabetes is often discovered, especially in the elderly, as part of routine annual blood testing. The following are the diagnostic values for diabetes:[2]

The onset of Type II Diabetes is typically gradual and subtle. It occurs when the body loses the ability to utilize insulin appropriately, which is referred to as insulin resistance. When glucose is unable to enter the cells, hyperglycemia results.

The symptoms that can indicate the need to rule out diabetes include:[12]

The complications of diabetes include:[20]

The goal of naturopathic treatment is to support and work in tandem with the healing power of the body and to address the causal factors of disease with individual treatment strategies. Diabetes is often considered a progressive chronic disease often due to lifestyle factors. The steps required to treat diabetes very much are dependent on the progression of the disease and the degree to which lifestyle and other risk factors are addressed. The goal of naturopathic treatment is to control blood sugar and to prevent the complications associated with diabetes.

The management of diabetes is always multi-factorial. It involves ongoing attention to a number of lifestyle factors including: